Bitcoin, the king of crypto, continued to suffer further losses this weekend, sliding below $8,000 on Sunday. The move continued to drag down a market that has been suffering losses for almost two months now. Falling from $340 billion in early July to $210 billion today, the total market cap of the cryptocurrency industry is now down by 33%.

However, it may finally be time for the altcoin market to come to the rescue. Looking on the weekly charts, Bitcoin is one of the only cryptocurrencies in the red. The current top ten leader, XRP, is up 6.2% in the week, with EOS up 3.5% and Bitcoin Cash (BCH) and Litecoin (LTC) up 1% each.

So dare we say altseason?

Over the past few months, mentions in the media of terms like ‘altseason’ and ‘altcoin’ have dropped off drastically, as highlighted in a recent tweet from Twitter trading platform ‘The TIE’ (@TheTIEIO). Since the June rally this year that saw Bitcoin surge to almost $14,000, news headlines have all but lost interest in altcoins. Now, it seems, that situation could be taking a turn.

XRP, in particular, has seen impressive gains in the past 24 hours, surging up to $0.27 in a matter of seconds earlier today. It has since continued to climb and looks set to regain its usual position above $0.30. Analysis from FXStreet sees XRP as ‘well-positioned’ – having already broken through resistance at $0.26, it’s now on route to the next target above $0.28.

EOS is another coin that could help ignite a new altseason rally. Like XRP, the coin also experienced a price jump earlier today, shooting up from $2.90 to break above the $3.00 mark. Tradingview analyst Jakub Petricek sees a continued upside trend for EOS/USD, with strong potential for a move above $3.30 in the coming days.

Another indicator of an impending altseason is the turn-around in Bitcoin dominance. Since April this year, Bitcoin dominance has been steadily climbing, from a low of 45% on April 2nd to a high of 78% on September 24th. Now, dominance has begun to retrace and is back down to only 67%. It would appear that after weeks of continued losses and lower highs, the faith in Bitcoin that early 2019 brought, is wearing off. 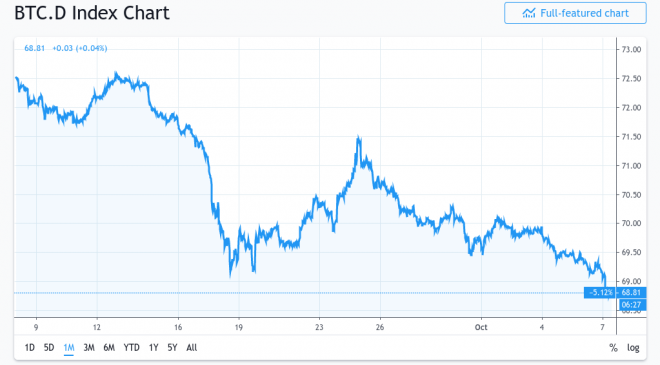