It appears as though Bail Bloc is turning its attention to detainees of the Immigration and Customs Enforcement (ICE). For those who are unaware, Bail Bloc is a cryptocurrency initiative where users install an app, and a small portion of computers’ processing power is used to mine Monero – which is widely considered the most private and untraceable cryptocurrency in the world. Every month, the Monero is converted into dollars and then donated to various bail funds in the National Bail Fund Network.

This month, the Monero (XMR) is going to the Immigrant Bail Fund, to post bail for ICE detainees. Bail Bloc’s website points out that only 47% of immigrants are even given a bond hearing, and that 1 in 5 detainees are still in ICE detention because they cannot afford to pay their bond. In addition, the vast majority of detainees – 97% – who are detained without representation eventually get deported, and only 14% have representation. 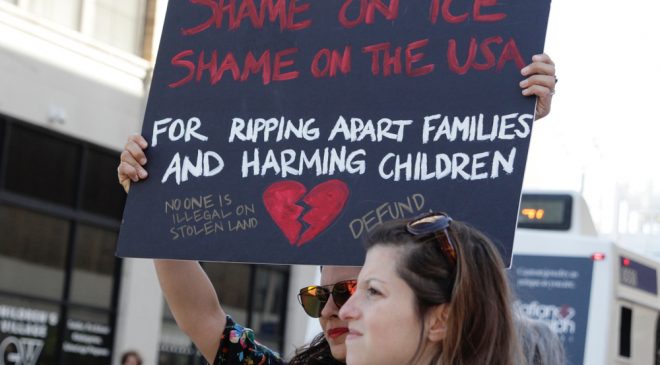 ICE’s methods have come under scrutiny as of recent, as many believe that they are using underhanded tactics in order to detain immigrants. A mother recently filed a legal claim against the U.S. government regarding the death of her 20-month old child who passed away while being detained by ICE.

One particular aspect of immigration detention that has infuriated the American public is the fact that many children – even toddlers –  have been forced to represent themselves in court. This was covered/parodied by John Oliver, who helped the story go viral months ago when the issue was being picked up by various media outlets:

The methods have gotten so extreme that the public has called on the abolishment of ICE, which was created in 2003, as part of post 9-11 legislation. The agency works under the Department of Homeland Security, and marked a shift in public sentiment where immigrants were seen as a threat. Trump has even referred to immigrants as “animals” before, which has helped to frame the narrative that ICE has to deport as many individuals as possible, even if they have lived in the United States for years.

Bail Bloc is not shy about the fact that they believe that the entire agency should be abolished, a sentiment which has been echoed by prominent politicians such as Alexandria Ocasio-Cortez, who is considered a rising star in the Democratic Party. Specifically, the website states: “With enough downloads over time, the compounding revenue generated from Bail Bloc has the potential to help secure the release of thousands of immigrants from ICE detention. The project of abolition extends to all forms of detention: abolish cash bail, abolish prisons, abolish ICE, abolish the militarized border.” The website adds: “Additionally, between November 15 and December 15, 2018, The New Inquiry will match in dollars the amount of Monero mined by users.”