What’s interesting about the 2015 occurrence is that, as with today, it also followed an extended bear market that saw Bitcoin lose over 80 percent in value. From a high of around $1,150 in November 2013, Bitcoin’s price dropped all the way to below $100 in January of 2015 before slowly recovering. If history is anything to go by, it seems likely that Bitcoin is now on the road to recovery after a devastating 2018.

What is so special about the golden cross? 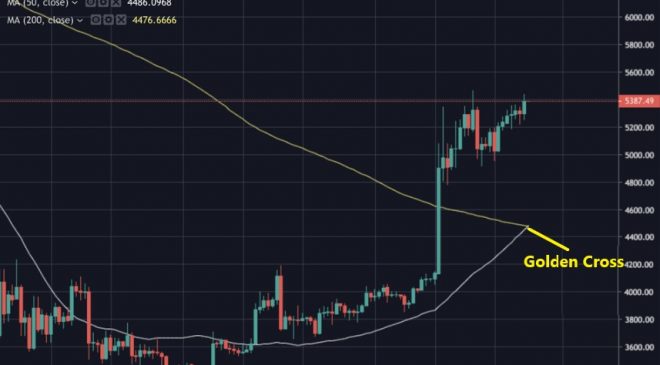 While a golden cross is usually a good sign in the long-term, there is still a strong possibility that Bitcoin will retrace to $5,000 levels before improving again. A similar pattern formed in 2015 when Bitcoin retraced from $317 to $200 in August before forming the second October golden cross and confirming the trend reversal.

Bitcoin is currently trading at a five-month high above $5,540 but is now in overbought territory based on the 14-day relative strength index (RSI). This is a further indicator that a pullback in the short term is likely, especially if BTC doesn’t close above the previous high of $5,466 today (UTC time).