After a week of mild gains, Bitcoin finally made a decent breakthrough $11,000 last night and then quickly broke away towards $12,000. However, resistance at $11,800 is proving strong – prompting many to ask: Is this a fake-out or a breakout?
There are several factors to consider in this fresh rally as some indicators have taken a strong turn. The relative strength index (RSI) has now moved into a sell position, suggesting that BTC is now oversold and could retrace. However, the MACD has flipped its compass towards a strong bullish position, which corresponds with the majority of moving averages.
With oscillators on the 1-hour now pointing to a sell signal, it would seem this rally might see a mild downward turn in the short term. However, all long-term moving averages are still heavily leaning towards further gains in the coming weeks.

The sudden break upwards has been attributed by some to a weakening Chinese Yuan (RMB) as a result of Trump imposing further U.S. trade tariffs. The yuan rose above the key psychological point of 7 yuan to the dollar yesterday, prompting a flood of capital out of the country. It is believed that much of this could be flowing into Bitcoin.
Speaking to BNN Bloomberg, Jehan Chu of Kinetic Capital says Bitcoin is increasingly being seen as a safe have:

“With the turmoil in markets and the streets, suddenly digital gold doesn’t seem like such a bad idea,” said Chu.

Another factor that could be precipitating this rally is the massive amount of USDT flying off the printing press lately. Tether has minted $750 million USDT tokens over the past month but BTC has, until now, been slow to react. With that money clearly not flowing into alts, it would seem big investors have been waiting on the sidelines for buying opportunities. With much of the USDT still sitting in limbo, BTC could experience a huge injection of volume at any moment now. 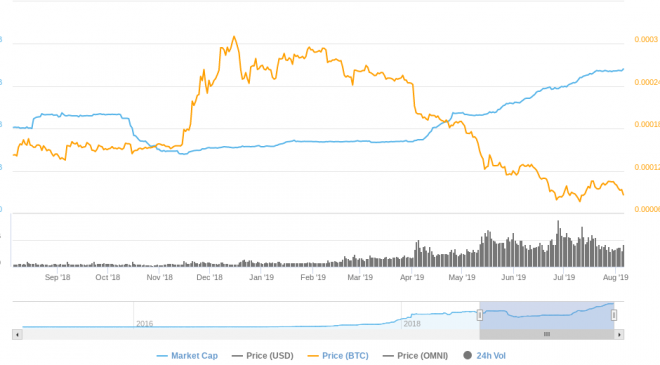 An argument for $8K?

Ever since the June rally to $13,800, Bitcoin bears have been calling for a retracement to $8K. As Bitcoin continues to defy these predictions, the idea seems to be fading. Is there still an argument for the current trend reversing to a level that low?
Tradingview trader Flibflib provided a sobering analysis for his forecast that envisions BTC to sub $8K in November with no further gains until 2020. However, as with many other similar forecasts, BTC has already moved outside of his analysis – revealing how this current rally has surprised some.
With BTC currently struggling to break $11,800 resistance, it’s hard to say where it will go from here. A mild retracement back below $10K is certainly still on the cards. However, a sustained break above $12K places BTC firmly in bullish territory with $15K on the horizon.

Bitcoin (BTC), along with the majority of other cryptocurrencies, has recovere ...