Home/News/Bitcoin (BTC) Price Breaks Back Above $8,000 in Surprise Rally, Will it Keep Going?

Bitcoin (BTC) Price Breaks Back Above $8,000 in Surprise Rally, Will it Keep Going?

After a week of dips and struggles, the Bitcoin price has finally broken back above the significant psychological level of $8,000 in a spectacular rally that no doubt caught some traders off guard.

Just yesterday it looked likely that the price of Bitcoin could fall as far as $7,200 due to a wave of fresh selling pressure and lackluster market sentiment. Now it looks like the ongoing period of consolidation that was on the cards for BTC has given way to the bulls. 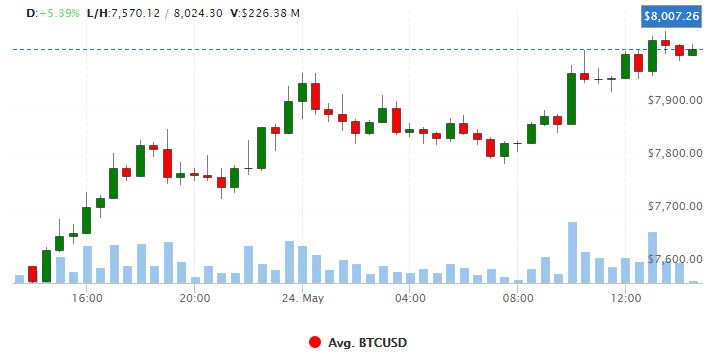 The rally has been helped along with several bits of good news for Bitcoin today. The cryptocurrency rating agency Weiss Ratings recently announced via Twitter that Bitcoin is currently in an excellent position for buyers. “Our chief crypto analyst Juan Villaverde predicts: Bitcoin correction and the best buying opportunity since 2015 are upon us,” the message read. The analyst notes how current price action correlates to similar instances in 2012 and 2015 after which the Bitcoin price enjoyed huge gains.

Yesterday, major U.S. telecommunications network AT&T announced that it would begin accepting bill payments in Bitcoin via the BitPay system. The news was seen as a major driver for cryptocurrency adoption by the majority of analysts but met some skepticism from long-term crypto enthusiasts who have seen similar attempts fail in the past. As Travis Kling of crypto fund Ikigai points out, people tend to “spend soft money and hoard hard money,” stating that Bitcoin is the hardest money in human history.

The news, however, certainly seems to have given Bitcoin a decent boost and possibly attracted some new buyers. With investors shorting traditional markets like the S&P500 at rates unseen since 2015, we may start seeing a lot of new money moving into the cryptocurrency industry.

What are analysts saying?

This is the first time in over a year that the 200-day moving average has gone into an upward bullish pattern and could extend the breakout all the way to $8,400. However, volume needs to increase drastically if the rise hopes to maintain momentum. These kinds of sudden upward movements are prone to equally sudden retracements if not propped up by sustainable buying power.

The Bitcoin price now faces weak resistance at $8,190 and stronger resistance at the previous price congestion level of $8,400. Support will be found at similar previous levels of $7,800 and $7,600. The relative strength index (RSI) remains neutral at 65.86 with the MACD now moving into selling territory at 626.78.

Last year saw the global news headlines filled with stories about an impending ...