At last, clarity surrounding TRON’s recent acquisition of BitTorrent has emerged. The reassuring news came on Monday, firstly via an announcement published on BitTorrent’s blog, and later in a letter authored by Justin Sun (Founder & CEO, Tron Foundation).

Indeed, BitTorrent’s post revealed that TRON – the project dedicated to building the infrastructure that will underpin a truly decentralized Internet – had “officially closed its acquisition of BitTorrent.”

Independently of the TRON Foundation, BitTorrent’s use as a communication protocol for peer-to-peer file sharing has soared in popularity since the early 2000s. The San Francisco-based company, BitTorrent, Inc., now maintains a global active userbase in excess of 100 million.

Aside from owning “one of the top-rated apps on Google Play,” there are numerous other offerings that comprise BitTorrent’s product suite. This includes BitTorrent Play (iOS), uTorrent Web, and desktop clients for both PC and Mac.

Now a subsidiary of the Justin Sun-led TRON, BitTorrent’s blog post added that the team, remaining in San Francisco, will move cross-town to TRON’s newly-purchased office, which is said to function as “the center of operations for the company’s global market expansion.”

In a letter to the TRON community (‘Tronics’) published later on Monday, Sun confirmed this merging of technical talent. Aiming to prolong BitTorrent’s status as the world’s largest decentralized protocol, Sun wrote that:

Combining the robust capabilities of the two teams will take the technology behind the TRON ecosystem to a whole new level.”

Buy the Rumour, Buy the News?

Despite the post from BitTorrent serving merely as confirmation of the acquisition-based news that permeated the crypto community several weeks ago, the price of Tronix (TRX) – the native token of the TRON decentralized blockchain platform – spiked relative to the cryptocurrency market.

Ignoring the “buy the rumour, sell the news” maxim that so-often prevails in the cryptocurrency market, TRX jumped 8.5 percent from its USD price of $0.32891 to $0.357 in the 40-minute-period after BitTorrent’s announcement on Monday – according to TradingView’s below chart depicting Bitfinex’s TRX/USD market.

At the time of writing, the exchange responsible for the most TRX-related daily trading volume is OKEx (~34%), followed closely by Binance (~26.8%) and Huobi (~15.3%) – according to CoinMarketCap. 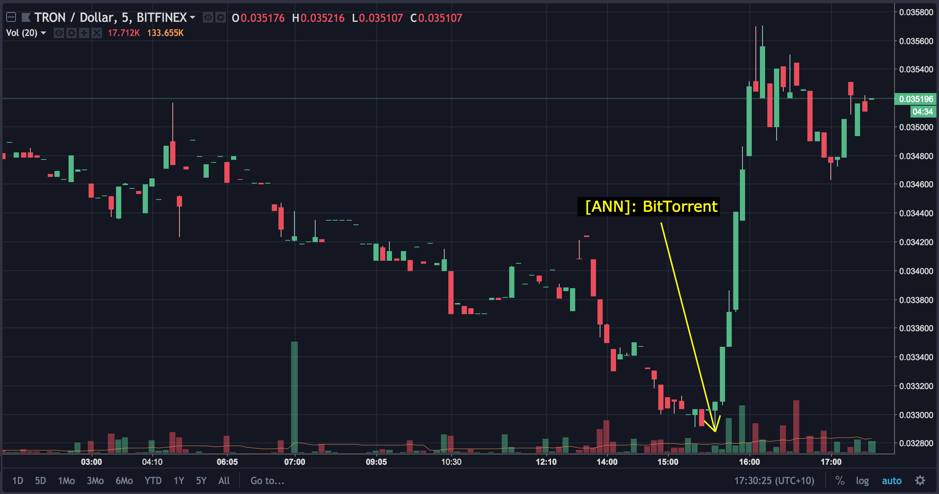