It may sound incredible, but based on its current momentum and trajectory, the Bitcoin (BTC) price should reach a new all-time high (ATH) this weekend if it continues in the current pattern.

Starting this past weekend, Bitcoin has increased by over 50 percent in the past seven days and gone fully parabolic, dwarfing all of this year’s previous rallies. In fact, as economist Alex Kruger pointed out in a tweet earlier today, Bitcoin should hit $17,500 as early as tomorrow if this bull market continues in the same way it did in 2017. However, as he makes a point to note: “past performance [is] not indicative of future results”.

Bitcoin is not the only cryptocurrency to be flying northwards this week. Ethereum (ETH) is up 31 percent this week, with Bitcoin Cash (BCH) up 23 percent and Ripple (XRP) up 12 percent. Amongst the smaller altcoins with decent volume, ABBC is up 107 percent in seven days, with Tierion (TNT) up 70 percent and Egretia (EGT) up 144 percent.

What could stop this rally in its tracks?

There has been a lot of regulatory change of late, especially in the U.S., resulting in several crypto exchanges and payment platforms having to ban their services in certain countries. If these regulations continue to tighten, we could see millions of new buyers access to cryptocurrency throttled. On the plus side, there is a much larger amount of regulated, institutional investment entering crypto this year than in 2017, which could make up for the reduction in retail investors.

There still exists a large contingent of investors who are holding depreciated BTC from the 2017 rally, just waiting for the right time to break even and cash out. It is quite likely that along the path towards $19,000 we will see a significant amount of resistance as long-weary investors take their first opportunity in 18 months to exit in the green.

BTC/USD short positions have also increased by around 32 percent over the past two weeks, indicating a strong sentiment amongst professional traders that a downside correction is imminent. However, if the price does continue to rise the liquidated short positions will help to drive the BTC price even further up. 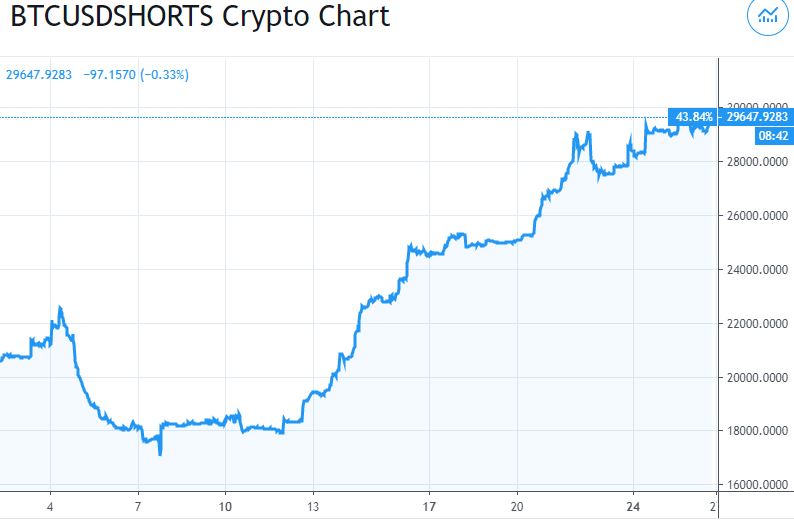 Parabolic moves always put technicals into extreme positions and this one is no different. Bitcoin’s relative strength index (RSI) has shot up to 88.89, suggesting a strong sell. However, all of Bitcoin’s moving averages put it in a strong buyers market for both long-term and short-term.