Following yesterday’s spike and subsequent flash crash, the price of Ethereum is down 10 percent today along with the majority of the crypto market. However, with this drop precipitated by Bitcoin’s rejection at $9,000, analysts foresee further gains coming.

ETH faced its own resistance at the £290 level before falling all the way to $240 before finding support. It has now managed to regain some stability and is trading at £252.31. Fortunately, it managed to maintain its position above the trendline from May 17th’s low of $223.90 so will likely make further gains towards resistance at $270 – where it traded sideways for most of this week.

Ethereum hit a new all-time high (ATH) for Gas Usage yesterday, recording a reading of 49.364.28 million on May 29th, 2019 according to Etherescan.io. After highs reached in late 2017, gas usage steadily decreased during 2018 but has been steadily increasing since the beginning of this year.

Gas tokens are used by the Ethereum network to measure the computational power needed to perform a certain transaction on the network. They are paid for by users and awarded to Ethereum miners for supporting and maintaining the blockchain. Measurements of gas usage are an indication of how much activity is present on the network. 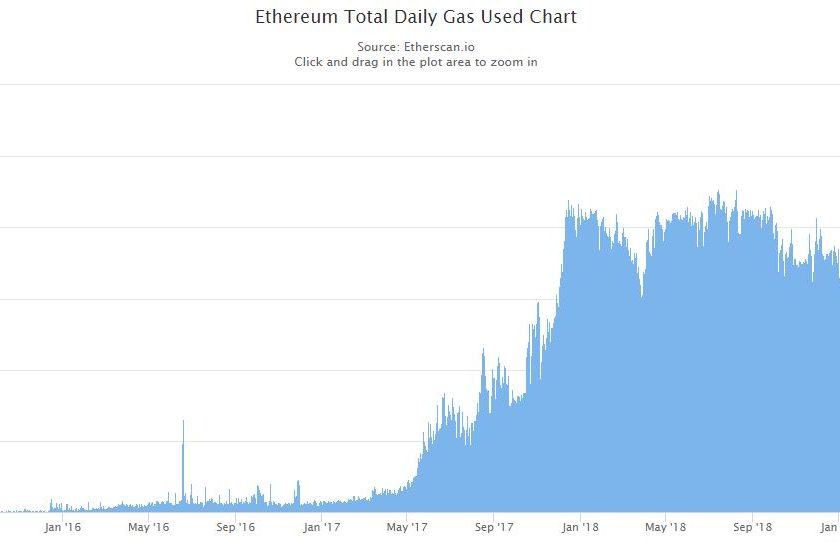 According to the online racing game F1 Delta Time, an unknown user identified only by the number 09E282 purchased a virtual car through the games auction platform for 415.9 Ethereum (ETH). That equates to over 100,000 U.S. dollars (USD) worth of Ethereum – an insane amount to spend on a real car, let alone a fake one.

It’s possible, of course, that the purchase was made by F1 Delta Time itself to promote the game but if not, somebody has a serious amount of disposable ETH. Graeme Moore, head of Tokenization at Polymath and author of ‘B is for Bitcoin’, echoed such beliefs, stating on Twitter that “probably whoever made it sold it to a friend and is then getting the money back right after.”

Ethereum continues to reveal itself as the most stable and reliable ‘smart contract’ blockchain available, with a growing drive to promote its ‘enterprise’ services. Ethereum Enterprise is the more professional side of the network aimed at helping businesses build their own blockchain-based systems. It is an open-source system managed by the Enterprise Ethereum Alliance (EEA) and defined by certain properties laid out in the current ‘Client Specification’ implementation.

The EEA is continually working towards improving components, protocols and operations on the blockchain, with documents for the Client Specification V3 recently made available for download along with the “Off-chain Trusted Compute Update V1.0.”