A recent political movement has emerged in France called the “yellow vests” movement. The movement began as an online phenomenon earlier this year, and ultimately led to demonstrations in the street by November 2018. The protests ended up expanding past France into surrounding European countries such as Germany, Belgium, and the Netherlands, as well.

Reasons For The Movement

The reason for the demonstrations is the fact that fuel prices in France have increased, which led to planned demonstrations to “block the roads” in order to protest the price hike. This actually led to France suspending the price hike, so many consider the protests successful. The moratorium on fuel price hikes will go into effect on January 1, 2019.

The movement is not simply about the fuel prices, as those in the lower-middle income class in France are also protesting in order to raise minimum wages, and to call for the resignation of Emmanuel Macron, whose approval has waned down to a 25% level. Macron appears to understand the severity of the situation, and made some concessions in a recent televised addressed to the nation:

The protestors are known as “gilet jaunes”. Since 2008, all French motorists are required to wear a yellow high-visibility vest, so the vests are widely available and inexpensive. They have now become an overall symbol of protest globally, thanks to the recent events in France.

The protest has now created its own cryptocurrency, apparently. The GiletJaunceCoin (GJCO) is a logical extension of the movement, given that it allows protesters to utilize their own cryptocurrency outside of a central bank or government.

There is currently a website created around the coin, with the slogan: “Get Your Freedom Back!” The website continues to describe the vision of the GJCO coin, stating:

“Easy to use, the GiletJaunceCoin (GJCO) is perfect for transactions between yellow vest citizens, or people who want to support the legitimate battle against European oligarchy. By providing the necessary infrastructure for a massive use of the GJCO, we are helping yellow jackets around the world to create a parallel economic system during this struggle for freedom.” 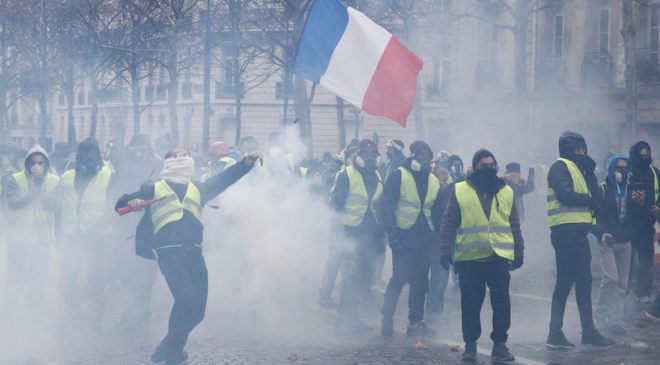 The website appears to echo the rebellious sentiment of the Yellow Vest movement, elaborating: “Decisions of our politicians, sold to evil banksters, reduce the quality of life and liberty of all European citizens, who worry a little more each day about the future of their children and future generations. The current European and the global banking system, already failing since 2008 economic crisis, is in its last days. The European states, with the help of the European Union, ar pressuring the people to finance this zombie system, trying to put nations on their knees.”

The website continues: “The French people, renowned for their violent revolutions and their courage, have thus initiated a movement of global social protest, which will now end only with the complete overhaul of our social and economic institutions.”

It’s important to note that it is still unclear whether the coin is legitimate, although time will tell whether there is a viable demand for the GJCO coin. You can learn more at www.gilentjaunecoin.com.