As the United States awoke on Monday morning, the cryptocurrency market took a sharp decline, with the majority of the top ten assets suffering a five percent slump.

Continuing on its recently stable path, Bitcoin (BTC) has only suffered a two percent drop, whereas Bitcoin Cash (BCH), EOS, Stellar (XLM), Litecoin (LTC) Cardano (ADA) and Tron (TRX) all lost about five percent value at approximately 7 am PST. Ripple (XRP) and Ethereum (ETH) were close behind, with around four percent losses each.

Monero (XMR), on the other hand, is down less than one percent over the past 24 hours, defying the synchronous movements of the rest of the market. One possible reason for Monero’s strong market stance is the recent introduction of ‘Bulletproofs,’ which has helped reduce Monero withdrawal fees by as much as 99.75 percent on many of the biggest cryptocurrency exchanges, including Binance, Bitfinex, and Bittrex. 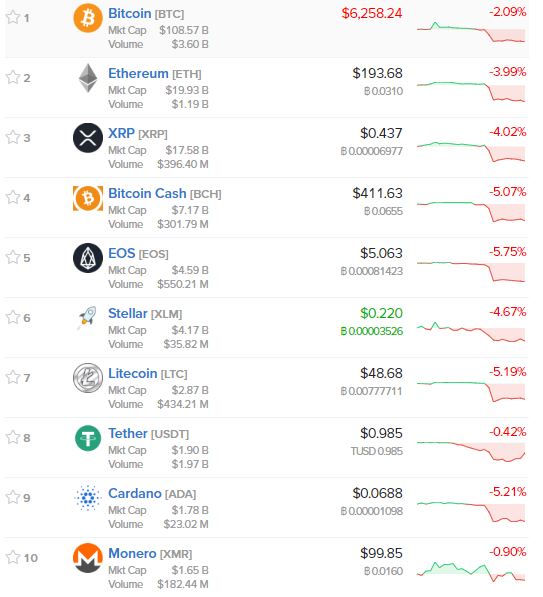 ‘Bulletproofs’ is a new upgrade to replace the current range proofs method that is used to hide the value of transactions while still making them verifiable and resistant to double-spend attacks. The problem with range proofs is they use a large amount of space and result in high transaction fees. The bulletproof upgrade makes Monero’s Ring Confidential Transaction (RingCT) feature far more scalable and as such, dramatically reduces fees for users. Average transaction fees have reportedly dropped from approximately 60 cents to as little as 2 cents since the upgrade.

Monero (XMR) is currently trading just below $100 per coin with a market cap of $1.64 billion.

Monero’s main competitor, ZCash (ZEC), has also recently announced a similar upgrade called Sapling Protocol. The new protocol will reportedly reduce the size of transactions by 100 times while making them six times faster. Despite the news, ZCash is still trading down six percent today, at $113.48 with a market cap of $581.11 million.