The cryptocurrency market opened deeply in the red this morning after the majority of coins suffered severe losses at around midnight (UTC) last night. The overall market lost about $20 billion in value as most top 10 assets fell by around ten percent or more. Following a mild recovery, Bitcoin (BTC), Litecoin (LTC), Bitcoin Cash (BCH) are all still down by around 8 percent, with the EOS and Ripple (XRP) price some of the worst hit.

However, looking at the weekly chart, XRP is actually faring best out of the top 10 cryptocurrencies by market cap. In the past seven days, the Ripple (XRP) price is only down by 3.68 percent – about half that of most other assets which have ten percent losses. This is the result of XRP making significantly better gains over the past week than most other assets. 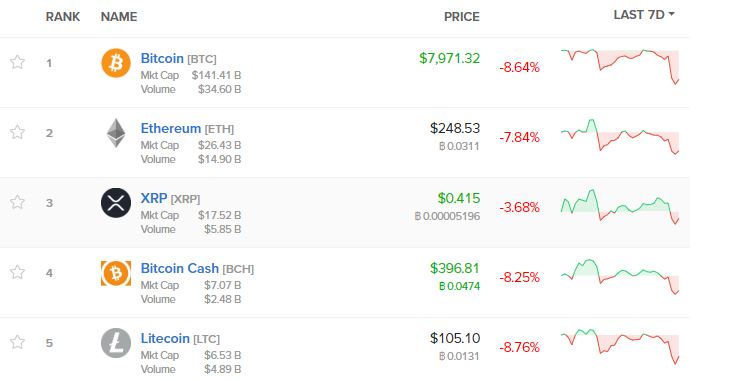 Yesterday, the Ripple Foundation released a new report via its Insights blog called “Raising the Bar: Reporting Volume and Sales of XRP“.

The report aims to address concerns from crypto enthusiasts regarding the reported volume on cryptocurrency exchanges. Lately, the problem of fake volume has become a hot topic in the community, with widespread allegations of wash trading amongst some of the smaller exchanges. The report details steps that Ripple are taking to remedy the situation, including working with trusted partners to better understand the scope of the issue and re-evaluating its own reporting of XRP volume.

Most notably, it states that sales of XRP in the 2nd quarter of 2019 will be ‘substantively lower’ than in previous quarters. It states that the reported sales volume will likely be about half of that of previous levels.

Despite the severity of today’s drop, XRP has managed to find support at the psychological $0.40 level, with the 23.6% Fibonacci retracement at $0.427 offering the first level of resistance. Above that, the 200-day simple moving average (SMA) on the 1-hour chart will present resistance at $0.435.