Shiba Inu (SHIB), the new DOGE-inspired meme coin that has gained favor off the back of Elon Musk buying a puppy, has once again exploded in value.

The coin is now the 12th largest cryptocurrency by market cap, despite having a per-coin price of only fractions of a cent. Now up by 216% in the past week, the coin climbed from $0.000008 last Monday to a high of $0.00003 on Thursday before retracing and settling around $0.00002. It’s difficult to accurately visualize the value of a coin in fractions of a cent but suffice to say, it’s almost tripled in value.

In its meteoric rise to the top, SHIB has overtaken previous Top 10 coins like Litecoin (LTC) and Chainlink (LINK), achieving a market cap of $13.5 billion. Dogecoin (DOGE) on the other hand, having been around for almost a decade, is only slightly higher in 10th position with a $31 billion market cap.

However, it would appear that Musk’s “endorsement” of SHIB is inadvertent – his purchase of a Shiba-Inu dog was inspired by DOGE, not SHIB, and Musk has never mentioned the coin publically. Either way, I’m sure the coin’s creators and investors are thankful. 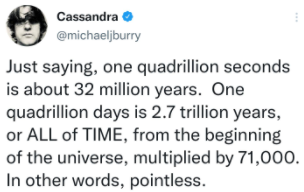 Shiba-Inu’s rise to fame has not gone without criticism – investor Michael Burry, whose character was portrayed by Christian Bale in 2015’s The Big Short, is less than enthusiastic about SHIB. In a tweet (now deleted) Burry said the coin has a total supply that exceeds 1 quadrillion coins, making it ‘pointless’. By comparison, Bitcoin (BTC) has a supply limited to 21 million coins, which many believe is the reason for its high value.

This hasn’t stopped some major crypto exchanges from taking notice, with the popular trading app Coinbase listing SHIB last month. In addition, a Change.org petition asking Robinhood to list SHIB has been doing the rounds, gathering over 200,000 signatures.