The cryptocurrency sector has been responsible for creating a massive amount of wealth, especially for long-term investors. Specifically, it has created companies that are now worth billions of dollars, such as Bitmain and Coinbase, and this is separate from all of the potential applications of blockchain technology to apply to various sectors and industries.

There is no doubt that many individuals have gained hundreds of millions of dollars in the space, while being elevated to a world-renowned status where millions of people across the world recognize them as thought leaders that will usher in the world of the future. For example, Vitalik Buterin, Charles Hoskinson,Tim Draper, and the Winklevoss Twins would be counted among the cryptocurrency world’s elite influencers.

However, there is only one Satoshi Nakomoto, the alias given to the unknown creator/developer of Bitcoin, and author of the Bitcoin whitepaper over a decade ago. His or her identity has never been fully discovered, and the subject has been the source of many disputes and theories within cryptocurrency circles.

A Twitter account by the name of @satoshi has caused quite the controversy within the cryptocurrency community. There are many who doubt the validity of the account, but that hasn’t stopped the tweets from getting attention.

The account – now suspended – had garnered over 13,000 followers, and its tweets were being retweeted hundreds of times. The tweets come during a time where Bitcoin has broken below the $6,000 level, which many has viewed as a key support level, and have possibly gained more traction given the fact that Bitcoin is declining in price.

The tweet that gained the most attention was posted yesterday, on November 16, and had an ominous undertone. The tweet strangely begins, “I do not want to be public”, although the Twitter account is obviously public.

The full tweet reads: “I do not want to be public, but, there is an issue with SegWit. If it is not fixed, there will be nothing and I would have failed. There is only one way that Bitcoin survives and it is important to me that it works.” Here is the original tweet: 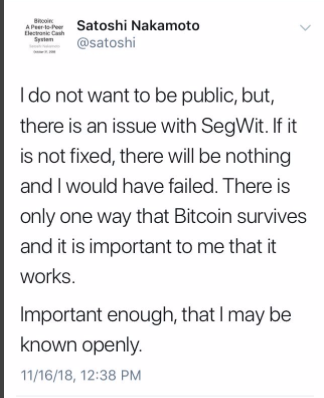 The next tweet elaborates that “the message will be clear in Dec 2019”.

The account is now suspended, which isn’t surprising, considering many in the cryptocurrency called on others to report the account. The largest theory was that the @satoshi account was really Craig Steven Wright. One Twitter user explained that he deduced this through the comma use of the user, and the fact that they both share the same narrative regarding Segwit:

It appears that CSW is in the possession of the @satoshi account. Both of them don’t know how to use commas and they share the same false narrative. pic.twitter.com/oFaKBKYzjo

Andreas Antonopolous, host on the Let’s Talk Bitcoin podcast and a cryptocurrency influencer with over 450,000 followers, supported the theory, retorting: “The real Satoshi was capable of forming sentences with punctuation and grammar”, and referred to the person behind the @satoshi Twitter account as “Faketoshi.”

LOL. Every message Faketoshi writes disproves his attempted fraud. The real Satoshi was capable of forming sentences with punctuation and grammar. We have plenty of samples, both formal and conversational. None were sloppy like Faketoshi.

Blocking @Satoshi, you should too. https://t.co/YZrhoz5qJh

Endorphina, one of the new and up and coming slot game designers has recently ...

Who Is Satoshi Nakamoto?

It might be strange to consider that an individual that has changed the world ...