Skip to content
You are here
Home > News > Why is Bitcoin (BTC) Going Up?

When I went to sleep last night, Bitcoin was doing well. It had crossed over the significant support level of $6,000 and was moving along nicely at around $6,300. I knew it would face strong resistance at $6,400 so I didn’t expect to wake up to much change.

What I woke up to was a shock. At 8am (GMT), Bitcoin was already pushing above $6,900 and looking ready to break $7,000 at any second. It didn’t seem to make any sense – so what is behind this insane rally?

Why the sudden surge?

Looking at the charts, Bitcoin is up an impressive eight percent over the past 24 hours but that’s just a drop in the ocean compared to the entire month. This time last month Bitcoin was flagging at a mere $4,900, a level almost 40 percent below where it’s at now. The vast majority of those gains have been made in just the past seven days.

The optimistic amongst us will jump on this news as proof that Bitcoin is finally revealing its true worth as the new gold or a replacement for cash, but I can’t help but be skeptical. It’s not normal for an asset to suddenly increase in value this quickly and if history is anything to go by, something more questionable is afoot.

The crypto market is no stranger to manipulation and I can’t help but draw comparisons between the recent Bitfinex/Tether saga and the allegations that Tether manipulation was responsible for the epic 2017 bull run that saw Bitcoin hit $19,000 before tragically crashing soon after. Furthermore, the industry has literally just suffered one of the most high profile hacks that it has ever seen and yet somehow, right now, of all times, people are choosing to panic buy?

So what’s going on?

The first thing you need to look at is volume. The amount of volume that was being pumped into Bitcoin earlier today was excessive, so much so that even the price reaction was low. That means a lot of that leftover volume was likely being put into short positions. So why are people shorting Bitcoin now?

It’s possible that big institutional players are looking to create sellers so they can buy large quantities of Bitcoin at a specific price. However, since liquidity is drying up they’ve had to try force a ‘squeeze‘ and introduce more liquidity by closing shorts. As these institutional players add positions at various levels, retail buyers start ‘FOMO’ buying in which pushes the price up further while traders continue to add short positions. This pushes the price up in a fast,  continuous and unsustainable fashion and doesn’t create any significant support levels along the way.

This could be incredibly dangerous because once Bitcoin hits a serious resistance level it could crash back down hard and fast right back to where it started, leaving all those FOMO buyers holding debt. The institutional investors though, knowing where to sell, could potentially cash out before and take the profits. Or, as market makers get stuck with unfulfilled orders they will need to sort out their books by revisiting previously levels and not be left holding the bag, so to say. In this scenario, it’s likely Bitcoin could revisit sub-$5,000 levels, possibly even as low as $4,200.

Alternatively, there is the whole ‘Bitcoin to Gold’ comparison which – when combined with the recent ‘Golden Cross’ event – makes for some compelling bullish sentiment. If you adjust the price movements of gold over about a twenty year period in the late 20th century and compare it to Bitcoin over the past year or so, it corresponds surprisingly well. The most telling indicator in all of this is the ‘Golden Cross’ event, an occurrence after which Gold, in 2005, suddenly entered an epic bull run.

Bitcoin recently enjoyed a similar ‘golden cross’ moment and has since closely followed similar movements that gold did at the time. If the graph pans out and Bitcoin continues to follow in gold’s footsteps, we are likely to see a $20,000 value for Bitcoin in the next few months. 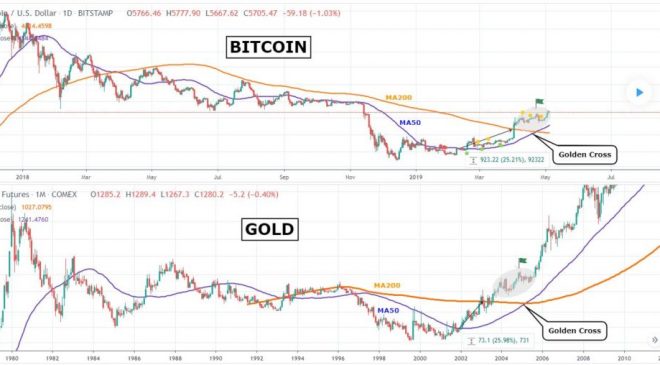 While the Gold-Bitcoin comparison is eerily similar, it’s also possible that it’s simply a coincidence that could be matched to almost any graph using the right adjustments. While there is no doubt the cryptocurrency industry has enjoyed a good year of impressive developments, a sudden and extreme rally of this kind is simply not realistic in the long run.

I would love to see Bitcoin break $10,000, but I would like to see it do so in a sustainable and rational manner that won’t result in it simply crashing back to $4,000. Volatility might be a nice way for day traders to make some quick money but in the long-term, it’s anti-adoption. Hopefully, this short squeeze levels out rather than crashing and BTC maintains a strong position above $6,000 so that it can build sustainably over the next few months.

One thing is for sure though – nobody is mentioning ‘the bottom‘ anymore.