Home/News/Why is Bitcoin Going Down? Possible Reasons Behind the Price Drop

The price of Bitcoin experienced a sudden and severe drop earlier today in what is not an entirely unexpected incident.

Ethereum (ETH), Ripple (XRP) and the majority of other altcoins following in Bitcoin’s footsteps, with ETH losing 7.3 percent in the past 24 hours and XRP losing 10.93 percent.

Reasons for the drop

Ever since last weekends parabolic bull run that saw Bitcoin add 50 percent in value over a few days, analysts have been predicting a strong correction. However, Bitcoin managed to defy the bears and maintain its position above $8,000 for most of the week – until now.

While the correction was overdue and expected, many are speculating on additional reasons for the flash crash. The most popular theory is that the crash was caused by a ‘whale’ dumping 3,645 BTC ($27 million) on the crypto exchange Bitstamp. The timing of the sale definitely coincides with the crash and could certainly be a significant factor.

Data also shows that Bitcoin’s buyers market had grown weak over the past few days and it’s likely sellers were getting ready to cash out. Any sign of weakness would have set off a chain reaction of sellers trying to get out quick and further fuelled the drop. BTC shorts have also been very low recently compared to BTC longs, the perfect environment to bring on this ‘long squeeze’. 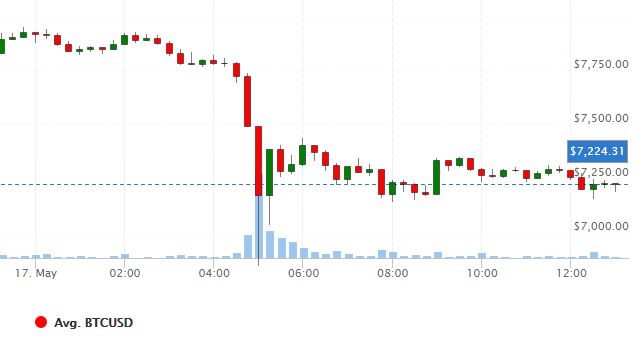 The drop seems to have levelled out, indicating the worst of the selloff may be over. The move also puts Bitcoin’s 14-day relative strength index (RSI) back in neutral territory after spending days overbought, with the MACD moving toward the negative region.

While the drop could offer the potential for buyers to get back in at a lower position, it’s likely that further losses may occur. With Bitcoin briefly dropping below the 50% Fibonacci level earlier and the majority of retail buyers now maxed out, BTC could struggle to regain upward momentum. It is likely there will be some consolidation over the next few days while the price steadily decreases before making any further gains.

The past few days have been good news for Bitcoin as multiple big name compani ...